Schools are matched on basis of the schools’ neighbourhoods and pupil populations. Combinations of schools are sought with pupils who differ in social and ethnic backgrounds.

The programme’s duration is two weeks (three half-days a week). The first week takes place at school. Children are prepared for the exchange and are stimulated to reflect on who they are themselves, on the kind of school they are attending and on the kind of neighbourhood they live in. At the end of the first week the pupils meet each other on the internet.

The actual meeting takes place at the beginning of the second week. The first half-day, half of the pupils are exchanged to another neighbourhood, whereas the other half hosts in their own neighbourhood. The second half-day tables are turned and during the exchange, pupils carry out explorations and games in the neighbourhood. The programme finishes with a competition, comparing groups for who has best gotten to know the pupils of the other school. 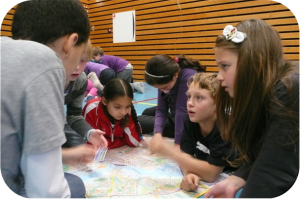